Braai broodjies (toasted sandwiches) are as South African as you can get.  I actually think many people have a braai (BBQ) just as an excuse to make these moreish toasted sandwiches.  You get different versions of braai broodjies and many arguments have pursued as to what you put in or how you grill it.  I´m not going close to that argument, but my father believes in only having tomato and onion on it, me however like the full house version with tomato, cheddar cheese, onion and a good helping of freshly grounded black pepper.

I have my own version and tips of how I do my broodjies on the BBQ.  For instance, fresh white bread is too fragile and tends to fall apart and therefore I use stale bread. I don’t like the crusts on broodjies, they tend to be dry and tasteless, and so I cut mine off.  If you are living in Norway, I would suggest you use “toastbrød“, its the perfect texture for these delicious grilled sandwiches.

There isn’t really a recipe as such; more a method and I will encourage you to play with the concept and technique to create your own special version. 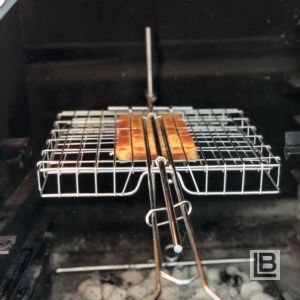